Author Aspiring Blogger Published February 16, 2019
Hindi Holi Songs
Holi Ke Gane
Holi Ke Gane | Hindi Holi Songs: Hello friend! Are you searching Holi songs list in hindi? Then this is the best place for you. We have created this website specially for Holi 2019 celebration with various posts on Holi. Music is part of our life and we have various kind of songs for various festivals. But when thing comes for Holi Celebration, we have various and tremendous range of songs on holi. 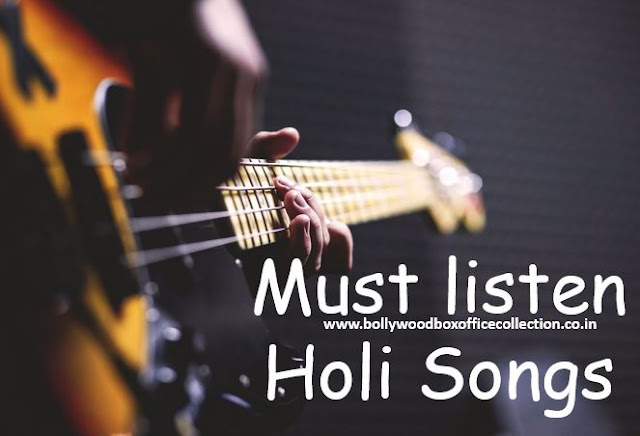 So let first start list of holi songs from old hindi movies. Bollywood has caught the feeling of Holi perfectly and has created a large number of Holi songs. The festival of color is captured in camera and words like nothing else. Have a look.

When list is created for holi songs, this song from movie Silsila comes very first in our mind. Movie Silsila was released in year 1981. There are almost 40 years of it's release but whenever you listen the song, you find it new. The celebration of Holi looks incomplete without this song.

Amitabh Bhachchan has sing this song and his father Harivansh Rai Bachchan was the lyricist of the song. And when extra ordinary talented father-son duo comes togather, this magic happens. A must listen for every Holi festival lover.

A beautiful song from the movie Navrang, released in 1959. The movie music is evergreen and specially this song. Mahendra Kapoor and Asha Bhosle created magic in this song that is still present. Mahendra Kapoor startred his career with this movie. The cinematography and picturization of this song is so beautful that this song is a treat to eyes and ears. The movie was directed by V. Shantaram. Music was given by C. Ramchandra while lyrics was given by Bharat Vyas. A pure class.

One more famous song from Indian classic movie Sholey. Yeah, Amitabh Bachchan, Dharmendra, Hema Malini and Jaya Bachchan starres movie has a special place in every Indian's heart. One of the major reasons of success of this movie was it's songs. It has very nice songs and a special holi song.

Holi is the festival of forget the differences and to become the friends and this song elobarates this feeling perfectly. Music of this movie was given by the great R D Burman while this song was sung by two of the great Indian singers Lata Mangeshkar and Kishor Kumar. Anand Bakshi gave the lyrics to this song.

One more classic song from old hindi movie Kati Patang. The movie was one of the biggest hit of Rajesh Khanna. The song from the movie was a massive hit and a feel good while hear it. Lata Mangeshkar and Kishor Kumar were the singers of the song. This song is still comes in top priority of music lovers.

One more hit song on holi by legedary duo Lata Mangeshkar and Kishor Kumar. Movie is Aap ki kasam, starring one of the famous jodis of bollywood, Rajesh Khanna and Mumtaz. The song is written to addressing the lord shiva but has captured the holi rang perfectly. A must listen to dance and enjoy on holi.

Like old hindi song list for holi, new movies songs list is also starting with Amitabh Bachchan song. This song was from the movie Baghban which was released in year 2003. Amitabh Bachchan was one of the singers of this song along with Udit Narayan, Alka Yagnik and Sukhvindar singh. Music was given by Aadesh Shrivastav while words given to the song by Sameer. Whenever you listen this song, feet itself starts tapping and heart starts enjoying the festival of color.

Ranbeer Kapoor and Deepika Padukone starring movie was one of the hit of the year 2013. The song was sung by Vishal Dadlani and Shalmali Khodgade. Music was given by Pritam. The song was picturized nicely in the movie and captured the heart of holi neautiful and naughty way. You would like to hear this song without holi festival too.

This song is from famous Yashraj film Mohabbatein. Movie was hit and the major reason was music of the movie. This movie has super and sweet songs about love and friendship. Shahrukh Khan and Amitabh Bachchan were in thir career peak form and direction of Yashraj. What else you need to succeed a movie. Soni soni akhiyo vali song was nicely picturized the holi festival.

one more Holi song from latest film. The song is sung by Raftaar and Nindy Kaur. Go pagal song has also picturised the colourful holi of Banaras and a must listen holi song for us.

If we are talking about Holi in bollywood movies than how can we forget this famous song. Sanjay Leela Bhansali is famous for his artistic creations and he has created that magic here again. The slow song that picks the holi beats perfectly and creates a large beautiful colorful canvas visuals to our eyes and music soothes soul and ear. A must listen song for every music lover for sure.


These are only top 10 songs we have selected. There are many more songs for Holi to listen but about them we will talk again some time.

Final words: So these was the list of Hindi Holi songs for you. How do you find these holi songs please tell us in the comment box below. If your favorite song is not in the given list then tell us in comment box below. Do not forget to mention song name with movie name to add in this list and don't forget to check this website for more happy holi images 2019. Happy Holi!