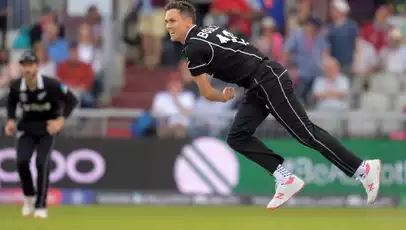 New Zealand bowlers just screwed the world best batting line up with superb piece of bowling. Kiwi bowlers kept Indian batsmen in control and did not let them to play shot with superb swing bowling on the overcast weather at Manchester. Have a look at resumed play from yesterday's game.

New Zealand 239/8 in 50 Overs
The kiwi team resumed from yesterday's play from 46.1 overs. India were on the high end in the game as they totally controlled Kiwi batting. India kept NZ at the total of 239 runs in decided 50 overs play. New Zealand lost 8 wickets in the match. Ross Taylor was the top scorer of the Kiwi team. Captain Williamson managed to make 67 important runs. Bhuvneshvar Kumar was the leading wicket taker from Indian team as he took 3 wickets. India were very happy and thinking that they were in final.

India were very pleased by stopping New Zealand at 239 runs and dreaming of reaching in finals as soon as possible but Kiwi bowlers were in dominant mode. New Zealand just made Indian batsmen cry for every single run. India again recorded lowest power play score in this world cup. Earlier NZ made that record by breaking India's record but Indian batsmen want to keep it with him.

As discussed in our match preview, we have talked that India had to beware from Matt Henry and Trent Bault and these two fast bowlers driven the Indian batting into the pavilion with their killer swing deliveries.

Rohit Sharma, Virat Kohli and Lokesh Rahul all the top 3 batsmen made 1 run each for the team. The scenario which started with Rohit Sharma's wicket did not stop till the last ball of 10th over. Rohit Sharma and K L Rahul bowled by Matt Henry while Virat Kohli's wicket taken by Bault. Dinesh Kartik also could not make it big and became the third wicket of Matt Henry.

11 - 20 Overs : Pant and Pandya tried hard to brought India back in the game
During these 10 overs, both Rishabh Pant and Hardik Pandya batted slowly but with positive intend. They both kept rotating the strike and hit the wick bowl to the boudries. These two Indian batsmen tried really hard to stay in the game. Both added 46 runs in 10 overs and kept Indian hope alive.

21- 30 Overs: Rishabh threw his wicket by unwanted shot, India in trouble again
Both Pant and Pandya were batting positively with good run rate then again disaster happen. Rishabh tried to hit six to Santner and got caught by the fielder. It was total unwanted shot from the Pant and Kohli also not looking happy with the shot. Pant made 32 runs in this important inning and added valuable 47 runs for fifth wicket partnership with Hardik. Dhoni came to bat after Pant's dismissal.
Pandya and Dhoni kept playing slowly and kept the scoreboard running.

31- 40 Overs: Pandya got out but Jadeja took charge
After Rishabh Pant, Hardik Pandya also became the victim of Santner's bowling. Hardik made 32 runs in this inning and Jadeja joined the batting with Mahendra Singh Dhoni. Both Dhoni and Jadeja batted well specially Jadeja with attacking mode while Dhoni on singles mode. Jadeja played some brilliant shot during these slot of 10 overs and kept India's hope alive to reach in the finals. India coming back to the game.

what a match this was! superb!