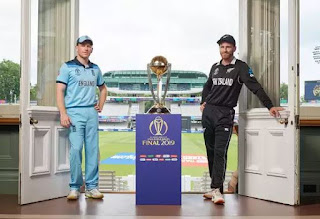 Cricket World Cup 2019 Final: So as promised we are here with the biggest cricket battle report and that is big final between host England and New Zealand. Both the teams have never won the world cup so this is the biggest chance for them. New Zealand were runners up in the world cup 2015 while England was in the final before 27 years.

So in this post, we are talking about the match and dissect the match in couple of parts for you. So stay tuned with the page as this will be updated regularly with latest news.

Cricket World Cup 2019 England vs New Zealand Toss:
New Zealand have won the toss and captain Kane Williamson decided to bat first at Lord's. England are not so good at chasing and New Zealand captain must have that thought in his mind. Overall a good decision to bat first on this big game.

New Zealand openers Martin Guptill and Henry Nicholas started the big game with the positive intent which was required and must needed. Guptill was looking good while batting but unfortunately he could not make it big after a good start. Guptill made 19 runs in 18 balls with 2 fours and a six. Henry Nicholas was very slow while batting but it was okay in the initial of the game like world cup final. Guptill bowled by Chris Woakes in 7th over. New Zealand's total was 29 while they lost Guptill's wicket. Captain Kane Williamson came to bat after one down.

After slow start in initial 10 overs, Kiwi batsmen, Henry and Williamson, started to boost up the run rate. Williamson took his time to settle down on the crease and kept accelerating the New Zealand batting. Henry Nicholas also started making runs quickly after slow start. Most important thing in this slot was that New Zealand did not lost any wicket and also added 58 runs on almost average of 5.80.